We are very pleased that Kathy Childress of Christian Aid will be joining us on the 1st of May. There will be 2 films,one for younger members of the church, and a planting ceremony in the churchyard after the service.  Kathy has a very powerful personal story of how she got involved with Christian Aid.

After 16 or so years with us the New Testament Assembly church has had to close. We will be praying for Zelda and her flock this Sunday as they hold their last service with us. They are having a special celebration from about 1pm to which we are all invited. Bishop Delroy Powell will be leading the service.

The Christmas services are in the final stages of preparation. We have a traditional 9 Lessons and Carols on the 20th at 6pm. Followed by refreshments in our hall.

Our Nativity Service with carols and high quality drama is at 4pm on Christmas Eve. Traditional Midnight Mass and Christmas Morning service follow.

Please see below for details about Southfields Theatre Group’s latest production. We are very pleased to be able to support this local group’s latest theatrical venture. Do come along if you can. 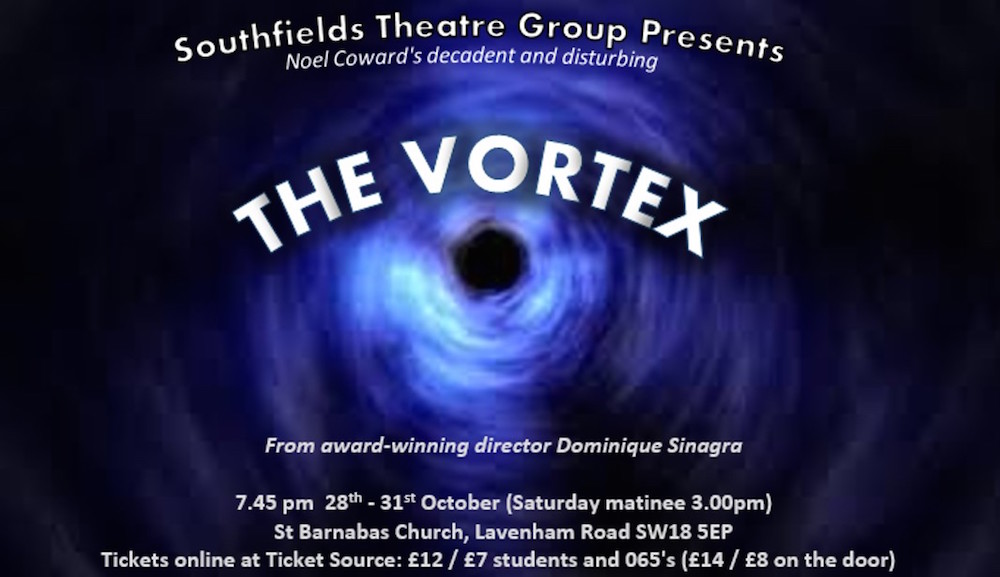 You are invited to audition for Southfields Theatre Group’s groundbreaking production of Noel Coward’s The Vortex.

The auditions will be held on the 28th and 29th of July at 7:30, with callbacks on the 30th, at the Aspire Centre , Merton Road, Southfields, SW18 5JU. The show will be performed at St. Barnabas Church in Southfields on the 19-24 October. We will be begin rehearsal on the 24th of August, also at the Aspire Centre.

The Vortex takes in 1920’s upper class Britain, where luxury reigns, whole separate lives are lived behind closed doors, and heartache prevails. The play also takes place in-between the First and Second World Wars, and so we are taking this opportunity to raise money for a soldier’s charity (TBA), especially because our performance will be shortly before Remembrance Day.

This will be a truly unique production for local community theatre. Directed in a semi-immersive fashion, the audience will be surrounded by the world of the play, and will follow the action as it moves throughout the space.

If you are interested in auditioning please email, dominiquesinagra@gmail.com and let us know which day you’d like to attend. At the auditions please bring a prepared monologue, and wear clothes you can move it, as we might do some group exercises. There will be photocopied scenes for you to work with in groups.

I look forward to meeting you.

The story follows a talented young composer, Nicky Lancaster. Nicky proposes to his lover Bunty, a journalist, while his mother Florence, an aging socialite, has extramarital affairs with younger men, including Tom, who is also Bunty’s ex-fiancé. Tensions come to a boil as Nicky struggles with his severe cocaine addiction and repressed homosexuality (a theme that was necessarily subtly conveyed, considering contemporary attitudes), as well as the simmering resentment he feels for his vainglorious mother.

Please note:  All playing ages are as a guide only!   Please don’t be put off auditioning if you feel you are too old or young, too fat, too thin etc etc. If you are passionate about this play, we would love to see you.

Florence Lancaster (the role is cast)

Florence is a glamorous, wealthy, socialite.  Terribly vain, superficial, selfish and histrionic, she is desperately trying to cling on to her youth ( in more ways than one!).

She has had many affairs and, when we meet her, she is in the throes of one with Tom Veryan, who is almost the same age as her son, Nicky.  She was once very beautiful, and there are still fragments of that beauty left.

petulant, highly strung, drug addicted, possibly homosexual.  Very attached to his neglectful mother. Oedipal overtones.   We hope to be able to cast someone who can play the piano.

Helen  is Florence’s friend. Though possibly a decade younger, she is solid and practical. A voice of reason. Smart, caring, level headed and perceptive.

Pawnie is a flamboyant, witty, acid-tongued and camp bachelor

Playing age 20’s: Tom is athletic and very good-looking and not much else. Ex-Army officer. He is having an affair with Florence.

Bunty is attractive in a 1920’s boyish, down to earth sort of way. Self assured, strong, perceptive.

Clara is an affected, melodramatic, soprano. Described as emaciated. However, I think she would be great fun to play!

Florence’s cuckolded husband and Nicky’s father.. Easy-going, resigned and long suffering in the face of his wife’s ‘temperament’.

Bruce is an earnest playwright. His plays are about squalor and poverty and are appreciated by the upper class.

Preston is Florence’s maid, described as having a wonderful poise.

She is a minor speaking role, but, in this production, her role is significantly enhanced as she will escort the audience through the space.

Dominique has been director or A.D. for several professional and community plays in the US. While travelling widely in Europe, Africa, South Asia and the Middle East, she has conducted many innovative filmin

With just over one week to go to the election it is not too late to have a look at the House of Bishop’s letter to the people  and parishes of the C of E, ‘ Who is my neighbour?’ Contrary to much of the misreporting in the press it gives no suggestions as to who to vote for,but simply outlines some of the biblical and theological perspectives which should be taken into account when voting and reflecting on the shape of our society.

One passage alluded to is Philippians 4:8.

St Barnabas Southfields is an Eco Church in the liberal catholic tradition.Welcoming, inclusive and engaged in the community.Vicar and tweeter Ian Tattum.

Great singing , food and company at our annual Christmas Fair.
Thanks to Salt and Pepper for incredible catering, as usual.
@MPSSouthfields @PutneyFleur @SingSwellChoir

Tidying up for a friend’s visit:
discovered Great Plane leaves have the wide crispness of a poppadom.

We regret that we are not yet able to accommodate parties and other single-use events.

There are 4 spaces available for hire.

We run the halls as part of our commitment to the community.  Although they raise revenue for us they are not profit making, so we ask all hirers to respect them and look after them so that they can be enjoyed by local residents for many years to come.

NB all hall names are merely working titles and all prices are open to revision!